The Experimental Aircraft Association held their annual pancake breakfast fund raiser at the Ann Arbor Airport this morning. This was our second year attending. 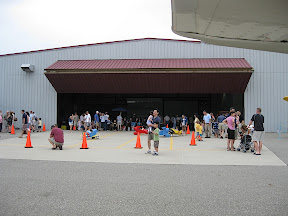 Breakfast was $5 for adults, $3 for children 3-9 (not sure of the upper age), and free for children 2 & under. Breakfast is served in the main hanger, so it is sheltered from rain and sun. They had pancakes fresh off of the griddle, sausage, orange juice, and coffee or tea. You could make multiple trips through the food line if you wished. There was a bit of a line to pay when we arrived, however it moved quickly. The seating is not plentiful, however people didn’t linger at the tables and seemed aware that the tables needed to turn over. The food was adequate, but was not the highlight of the event.

For the kids, they had free face painting (or hand/arm/leg based on child preference), a bounce house, and pedal planes. Of the children’s activities, the pedal planes were by far the biggest hit for my daughter, with her riding them twice. The first time, it was a free-for-all to get a turn on the planes. When we returned, they had organized a line which was appreciated.

There were a number of planes there. My daughter got to sit in one. The pilot was even letting the kids sit in the cockpit and wear the pilot’s headphones, as depicted in the picture. I felt like there were more planes there last year, however it could be a difference in the time we were at the breakfast. They also offered helicopter rides for $40/person. While we opted not to spend the money on the helicopter, it was still interesting to see it take off and land. The Pittsfield fire department had 2 fire trucks on hand and there were also some classic cars including an Army jeep.

We had a great time at the breakfast and are looking forward to attending in 2011.