Finally, a Lego Store in Michigan!

Judging by the lines just to enter the door at the new Lego Store in Somerset Mall this weekend, I would say a Lego Store in Michigan was long overdue.

My husband is a big Lego fan and is converting our daughter. We had heard that a Lego Store would be opening up in Somerset and were planning to visit at some point. On Saturday, he asked if it was open yet and I said yes it opened on Friday. We decided to make a trip up on Sunday. The website said the store opened at noon, so we timed our arrival for then. When we arrived, there was a line wrapped from the entrance half way down the corridor. The line persisted throughout the day and when we asked someone near the front of the line, they said they had been waiting for 90 minutes. We opted not to wait in line and will instead return later this year when the initial mania has dropped off. 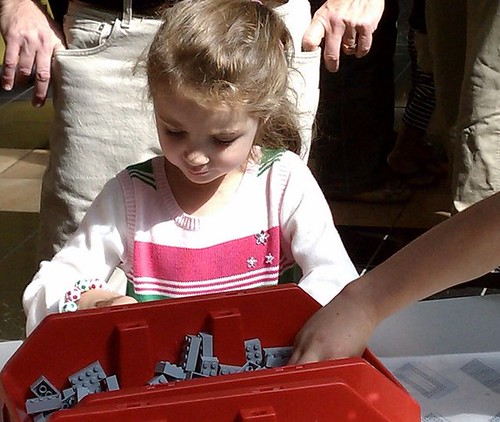 While we missed out on actually entering the store, we did not miss out on the Lego fun. On the first floor in the main court of the mall, they were assembling an 8 foot tall Buzz Lightyear of Legos. They had tables setup where kids were asked to assemble a brick piece that is used in constructing Buzz. Each table had a different color of bricks. They had sufficient tables and bricks that everyone could build without waiting. The building instructions were simple enough that even my 4.5 year old could do it. When you handed in your assembled piece, you received a coupon to take up to a table outside the store for a personalized certificate.While they had many more bricks assembled than they needed, the staff took your brick, gave you your coupon and then placed it in a bin near the builders. I did see some of these bins disappear (presumably to be disassembled and the bricks reused since there were many more brick assemblies than they needed). This process was done fairly discretely that the kids were not aware that all of the bricks were not being used. 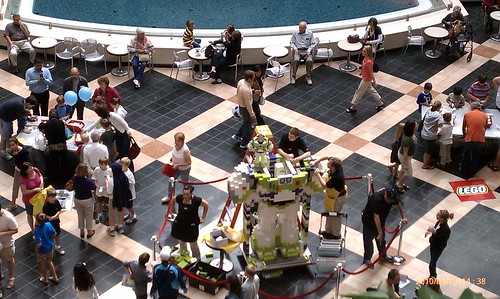 We are hoping to see the completed Buzz Lightyear at the Lego Store on our next visit. I think Lego missed out on a huge opportunity to capitalize on sales. I would have had a few sets available for purchase in the building area for people who could not get into the store. We would have likely purchased a set had their been any available without a long wait.

I did see quite a few people leave the store with bags. One thing that surprised me, was that after waiting in line for over an hour to get in the number of people who bought standard Lego sets that can easily be found in stores like Target, Toys R Us, Meijer, Walmart, etc instead of the Lego exclusive sets. From what I could see, the Lego Store is not huge. Basically it is a standard single store front in a mall. Having previously been to the Lego Stores at Downtown Disney in Orlando and Anaheim, and the store in Chicago, this was smaller than I was expecting. The Disney stores are quite large and have numerous building tables in them and many models. The Chicago store is a bit smaller than the Disney ones but still had a couple of building tables and one or two models. I don’t know if the Somerset store has any building tables, and will likely only have the single Buzz model.

While at Somerset Mall, we enjoyed a delicious lunch at PF Chang’s. My daughter loves their kids chicken fried rice made without vegetables (they will add some if you ask). It is a generous portion and much more reasonably priced than some kids meals. My husband and I opted to share a meal in order to save room for dessert. They have small individual desserts. These are the perfect size to eat alone, even for my daughter.

No posts found.
The following two tabs change content below.