In July our friends from Philadelphia came out to visit the weekend that the Philadelphia Phillies were in town to play the Tigers. So the 7 of us (my family of 3, their family of 4) attended a game at Comerica Park in Detroit.

Comerica Park is located in downtown Detroit and is easily accessed from the highway. We parked in the Fox Theatre garage. We arrived early so that we could have dinner at Hockeytown. We were hoping to dine in the restaurant, but there was a 40 minute line to get a table (we were afraid that we would miss the start of the game by the time we ate). We opted to head upstairs to the third floor bar area where they serve pizza. There were plenty of families having pizza so we did not feel out of place having our kids there. There was a bit of a wait for our pizzas, but they were quite tasty.

We had upper level seats, so by the time we ate our pizza, took a few pictures outside the stadium and found our seats, they were playing the National Anthem.

Comerica Park is a very nice stadium. Kids will love the giant Tiger at the entrance and Tigers perched on the stadium roof.

Our seats provided a good view of the stadium. My daughter isn’t a big baseball fan, especially since she had no interest in either team. I grew up as a Mets fan, so my daughter is too. She kept asking me who to cheer for – Tigers or Phillies. Usually we cheer for the National League team, but since the Phillies are a rival, I told her to cheer for the Tigers. Since she wasn’t really invested in the team, she wasn’t that interested. We stayed in our seats until the middle of the game. Then we went in search of snacks.

We headed to the main food court where the girls were able to ride the Tiger carousel. Before getting in line for the carousel, you need to buy a ticket at a booth (or you can have one person wait in line while another gets the ticket). My daughter (7.5) and our friend (8) both loved riding the carousel. After the carousel we got ice cream and my husband and I took the girls to ride the Ferris Wheel. 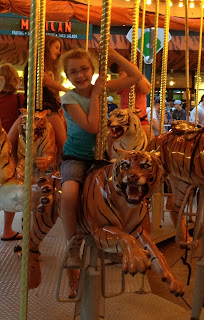 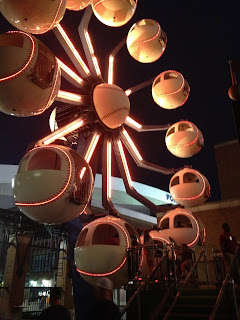 Since my daughter doesn’t particularly like watching sports, I love that there are so many extra activities  around the stadium. The rides were reasonably priced, I believe $1.50 for the carousel and $2 for the Ferris Wheel. We definitely recommend a Tigers game as a fun family outing.