This post was originally published on my Fun with Your Kid Blog. I have consolidated the content onto Ann Arbor with Kids.

Before we visited Niagara Falls this summer, I had previously been in 1986 and one of the things that I remember was all of the touristy “kitsch” places. There is still plenty of kitsch to be found in Niagara Falls and much of it is centered on Clifton Hill. You will find Wax Museums, Horror Houses, Ripley’s/Guinness museums, themed mini-golf, and of course shopping. The Falls Avenue Resort Complex includes hotels, a casino, dining, shopping, the Fallsview Indoor Waterpark, and attractions.

The Falls Avenue Resort’s 4D movies, Pink Panther Ride, and Adventure City have entrances on Clifton Hill as well as through the resort.

While in Niagara Falls, we decided to partake of some of the attractions.

We started with the Falls Avenue Resorts attractions since they were included in our hotel package (mini-golf, bumper cars, SWAT ride, Pink Panther ride, and 4D movie). We played 9 holes of indoor glow miniature golf with a safari theme. They allowed us to use the golf and ride tickets interchangeably (the 4D movie was separate). My daughter was not tall enough for the bumper cars, so we headed for the SWAT ride. On the SWAT ride you drive through a city and use laser guns to shoot targets. My daughter loved this ride and we used our extra tickets for this ride to ride it several times while in Niagara Falls.

The Pink Panther balloon ride is located on the roof of Adventure City. There are 6-8 balloons arranged around the center pole that will each hold up to 4 people. The balloons ascend the pole and then rotate around it. While the Sheraton blocks your view, at certain angles you can see the falls (and Clifton Hill below). We boarded the Pink Panther as the fireworks* over the falls were starting. We were the only ones on the ride and there was no line, so the attendant kept us on the ride until the fireworks ended. It was definitely a unique view of the fireworks. If you are afraid of heights, definitely skip this ride. While you stay over the roof of the building, you are near the edge and looking all the way down onto Falls Avenue. Since the ride was included with our package, I am not sure how much it would cost to buy the tickets individually.

Our package also included a show at the Iwerks 4D movie theater. We were not sure what to expect, but knew that the movies were Happy Feet: The 4D Experience and Journey 2: The Mysterious Island. I wasn’t sure what to expect from a 4D movie. It is a 3D movie that you watch from a motion simulator chair. The chairs are in sets of 2 and move you in conjunction with the movie plus add special effects like sprays of water and puffs of air. The show included both movies (which were under 10 minutes each). My daughter loved the movies and the ride. They do offer a few stationary seats which my parents took advantage of since my mother does not like motion simulators.

Clifton Hill Area Attractions
When walking along Clifton Hill it is hard to miss the kitsch. There are the Guinness World Records Museum, Wax Museums, miniature golf, Ripley’s Believe it or Not Museum, Haunted Attractions, and much more. The museums are pretty small and will take under an hour to explore.

One night, my parents suggested the Louis Tussaud Wax Museum. They had visited it in the late 90s with my siblings and enjoyed it. The Louis Tussaud Wax Museum is located on Victoria Avenue just east of Clifton Hill. Unfortunately, many of the wax statues were still from that era so my daughter did not recognize them. Even some of the newer statues were not people that she would identify with. She did get a little excited at the Harry Potter and Pirates of the Caribbean, although she seemed a little apprehensive of the wax figures. Also, she did recognize a younger Harrison Ford from Star Wars and Indiana Jones. By far her favorite part was getting to walk the tightrope over the falls. It was nice that you can walk right up to the figures and touch them to pose with them. I definitely recommend waiting until kids are teenagers for the Louis Tussaud Wax Museum. 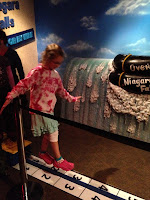 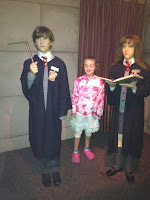 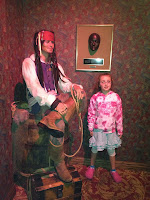 The Guinness World Records museum was more to my daughter’s liking. She loves trivia and history, so this was right up her alley. There were a few exhibits that we steered her clear of (ie the most tattoos on a stripper). Even so we spent under an hour in the museum. 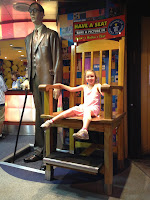 The one night we ate along Clifton Hill. We had a large, late lunch that day, so we weren’t looking for a big meal (either in time or size). I would have loved to find a nicer counter-service place (ie Noodles & Co, Panera, Chipotle, etc). Instead, we found either fast food or table-service restaurants. Even when I tried asking the concierge, he had no idea what I was talking about steering me to a bar for counter service. We ended up getting counter service pizza at Pizza Pizza (comparable to Little Caesars) on Clifton Hill and eating outside listening to music.

Clifton Hill is definitely a great place to shop for souvenirs. Many of the shops have affordable t-shirts, sweatshirts, and other memorabilia. They also had plenty of “Canada” food items like maple syrup, maple cookies, etc.

*There are fireworks over the Falls on Friday, Sunday, and holiday nights in the summer. They also held them on Monday night while we were there since it was a Canadian holiday. We watched the Fireworks on Sunday, so were not making plans to see them on Monday.