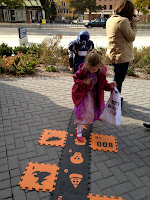 The University of Michigan Exhibit Museum of Natural History had their annual Family Halloween Party this afternoon. We had a great time at the party. The party is a great mix of treats, crafts, games, stories, and education. The event was packed, but it was not an unpleasant experience.since everyone was having fun (unlike Briarwood Mall last night where it was packed and people were frustrated with a poor event).

Upon arrival at the museum, there were a few games setup outside. Kids had to toss bean bags into a cauldron to win a museum magnet. They had to knock over “candy corn” to win a sticker. I loved the candy corn idea.In the past my daughter has had Halloween parties and this year I ran the games at her school Halloween event. I am definitely going to turn our cones into candy corn and do something with them. 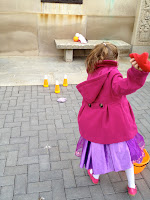 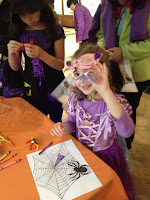 Once we entered the museum we went up to the second floor and began exploring the activities on the second floor. There was a membership table where kids could get a treat and they had information on memberships. Then there was a spider table where kids could make a spider from pipe cleaners and a bead as well as a spider web coloring sheet. They had lots of different colors of pipe cleaners and beads to make the spider. The table was crowded but it was not too hard to get a spot at the table. 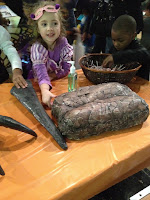 My daughter then saw a friend and they checked out the fossil table. After having done a dinosaur unit last year in preschool, and watching Dino Dan and Dinosaur Train, they are both quite knowledgeable about dinosaurs (my daughter definitely knows more than I do). They impressed the volunteer at the table with their knowledge.

The third floor landing had bone specimens of animals and they had several crafts setup. The crafts were extremely popular and it was a very crowded area. However, the kids loved doing the crafts. The fourth floor was a bit less crowded. They had story time and our kids took a needed break to listen to a few stories. Fortunately we were able to sit as well. They also visited the archaeology exhibit which had a scavenger hunt activity for the kids. The kids had to answer questions or draw pictures based on the material in the exhibit. My kindergartener was able to do the activity by herself. Upon handing in the scavenger hunt, they received chocolate coins.There were also live animals in another area on the fourth floor. I heard from a friend that the animals area was packed, so we decided to skip it.

I definitely plan to attend this event again next year. I would recommend it for anyone with kids age 4 or older. We attended for the first time in 2009 when my daughter was almost 4. Attending this event also reminded me how much my daughter enjoys this museum. I need to plan a day to take her back when it is less crowded and we can enjoy the museum itself.
Disclaimer: I am a LivingSocial affiliate and am compensated for sales through LivingSocial links. I appreciate your support of my blog by shopping through my links. Please read all terms and conditions of the deal before purchase, they are only summarized here.

1 thought on “Great Times Were Had at Family Halloween Party”