This year we attended Holiday Nights at Greenfield Village. Holiday Nights runs from 6-10p on select nights in December. Saturday nights sell out quickly, so if you want to attend next year, plan to book early. See my review of Holiday Nights.

They also offer a Supper with Santa before the start of Holiday Nights. The dinner runs from 4:45-6p. It starts with a horse drawn wagon ride from the Greenfield Village to the Taste of History restaurant for dinner. Santa will visit your table at dinner. There are also crafts and stories at the dinner. We had fun at dinner, and while there are things I wish were a little different I would do Supper with Santa again.
We arrived about 4:10 so that we could make a trip into the Henry Ford. My daughter and I had been there the day before and she wanted to show Daddy the Lego train display. The nice thing about having a membership was we could go in for 15 minutes. See my separate review of the holiday activities at the Henry Ford Museum. 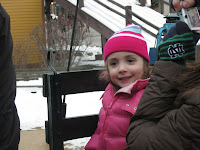 The gates opened shortly after 4:30 and they began loading carriages. By being in line at 4:25, we were able to get on the second wagon. They were only using two carriages, so if you did not make the second wagon then you had to wait for a wagon to return from its first trip.

The drop-off point was next to Eagle Trace Tavern so there was still a short outside walk to Taste of History. When we arrived at Taste of History, we presented our tickets and were shown to our pre-assigned table (your entire group will need to make your reservation together to receive one table). Each table was set with a sugar cookie for each person and a bottle of water. Some tables had 8oz bottles and others had 20oz bottles. Since we attended the last Supper With Santa in 2010, they must have run out of the one size bottles and had to use some of another size.

There was wait staff to bring you beverages – sodas, hot chocolate, etc. Since Taste of History is typically a cafeteria style restaurant, you went up to get your own food. They had one station open serving the dinner. The dinner was a turkey dinner with mashed potatoes, carrots, and stuffing. Unfortunately, you were only allowed to select two of the three sides. There was also rolls and cranberry sauce. The kids could select a hot dog in place of the turkey. The food was decent, although I was disappointed that we had to select which sides we wanted. The material online and that we were provided with our tickets implied that you received all of the sides. 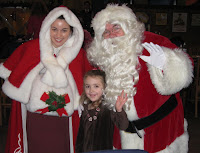 Santa and Mrs Claus stopped by each table. Their visit was brief, but long enough for a few pictures. I also thought Mrs Claus looked young (as did Santa under his beard). It would have been nice to see them at the dinner and having more time to interact, but they understandably needed to get ready for Holiday Nights.

In the restaurant lobby, they had a craft table setup so you could make jingle bells. When we arrived, we took enough for my daughter to make a set. After dinner, all of the adults also went and either made a set at the craft table or brought the materials back to our seat. At one end of the table, they were encouraging you to take the materials and return to your seat and at the other they were encouraging you to stay at the craft table. It was neat to carry our jingle bells through the Village later in the evening. 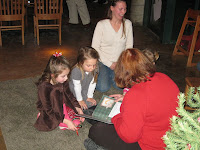 They also had story time going on under the tree. They were reading a book about Holidays at Greenfield Village. The story time never drew more than a few kids, but the kids who were there when we were seemed interested.

If you attend the Supper with Santa, I recommend making sure you have used the restrooms before 5:30 as they get crowded with people making last minute stops and adding warmer clothing layers in preparation to be outdoors.