Last night my daughter attended Kids Night In! Mini Camp at the University of Michigan Museum of Natural History. One of her friends had attended in the spring and had a great time, so when we saw the event we signed up (as did her friend).

My daughter loved Kids Night Out and wants to attend again in the future.

Kids Night In runs from 6-10p leaving time for a quick dinner and a well-timed movie if you wish.  You could also have a more leisurely dinner. I registered online by emailing the museum at the address listed on their event listing and was sent the registration paperwork which I was able to complete and digitally sign as a PDF and email back to the museum. The event costs $35 ($30 for museum members) and you can pay by credit card on your registration form. Kids are invited to bring a pillow and PJs for the movie at the end of the night.

Kids Night In starts at 6p. Since several blue lots in the area of the museum are free beginning at 6p, it is possible to park for free at drop-off. I parked in the lot under Palmer Commons for drop-off using my husband’s UM parking permit (this lot is paid visitor or by permit until 10p). There is a small lot behind the museum that is open parking after 6p. When we arrived, staff was on hand to open the museum door since the museum had closed at 5p. I signed my daughter in and they had a name tag ready for her.

They started with dinner as the kids drifted in. They had Little Caesars Pizza and water bottles with flavor packets (lemonade or Hawaiian Punch). The kids had dinner in the rotunda at the museum entrance. Some kids sat on the stairs and others on the floor. I did help my daughter open her water bottle (one of the sport bottle styles) and add the flavor pouch before leaving. In addition to the pizza, they made edible comets from ice cream, chocolate syrup, and sprinkles. I am not sure when they had the ice cream. 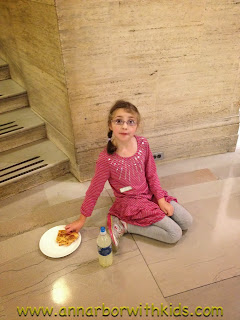 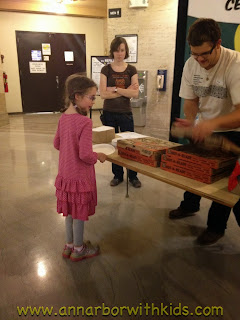 After getting my daughter situated with dinner, snapping a few pictures, and talking to our friends who were also dropping off, I headed out and need to rely on my daughter for a description of the activities. As we walked out with her friend, we heard about the planetarium show that they saw, especially the black hole portion. The kids were fascinated and decided that the other side of the black hole was “another universe – the universe of Star Wars”. She also said that they did an experiment with Skittles in water. Finally, the kids did a craft of a crown with antenna. My daughter’s crown was missing it’s antenna when we arrived, but she had fun making it. She was disappointed that they didn’t get to visit the dinosaurs.

My husband and I arrived around 9:30 for pickup and found the kids watching TV. They had setup large foam interconnecting mats on the floor. Many of the kids had changed into PJs and had pillows and blankets for watching TV. They were watching Magic School Bus episodes. My daughter loves Magic School Bus. When we arrived, they had just finished one episode and were getting ready for a second. Since we were early we let her stay for the second episode which ended right at 10p. You are free to pickup anytime before 10p. However, they ask for advance notification if it will be before 9p as they are not necessarily located near the front door to let you into the building. 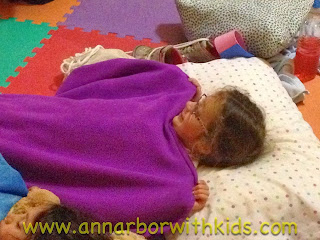 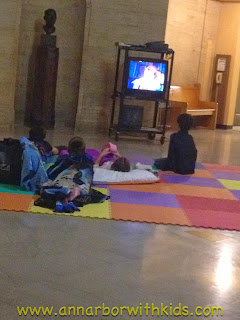 She was quite tired by the end of the night, and ready to head home for bed. It was a late night, but I’m hopeful she will sleep late today.

We definitely recommend the Kids Night In at the Natural History Museum. I will be keeping an eye out for their next session. We are also awaiting the museum’s next big event, the Family Halloween Party on Sunday, October 27.