I was selected for this opportunity as a member of Clever Girls Collective and the content and opinions expressed here are all my own.

My daughter loves reading and is a fairly advanced reader for her age (2nd grade). When I was presented with the opportunity to participate in a campaign for an adventure/travel series of books, I knew that she would be thrilled to participate. She loves learning facts and is a big fan of adventure/treasure hunting (she is currently playing LEGO Indiana Jones on the Wii and just rewatched National Treasure). 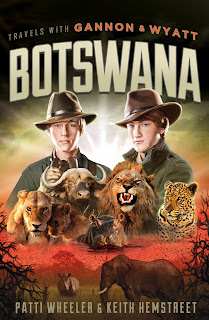 The Travels with Gannon & Wyatt series is an adventure series geared towards kids ages 9-12. Gannon and Wyatt are 15-year old twin brothers who travel with their parents (a flight attendant and an artist) and have adventures. The stories are based on the real life adventures of Gannon & Wyatt. There are currently three books in the series: Botswana (released May 2013), Great Bear Rainforest (released October 2013), and Egypt (scheduled for release in January 2014). In addition to the books, they also have a web series with videos about their real-life adventures.

My daughter believes in doing things in order, so we started with Botswana even though she is really interested in Egypt. We started the book as a read aloud where we took turns reading at night, but then she decided that she wanted to keep reading it during her daily reading time. We finished the book with a combination of daily reading and read aloud at night.

The book is told through Wyatt and Gannon’s field journals as they have their adventure. I really liked that format because it made for shorter entries with lots of natural break points in the reading material instead of long chapters.

When she was younger, my daughter loved the Magic Treehouse books and all of the interesting places that they went. Again, she read the series in order and made it into the 40s before losing interest. In Travels with Gannon & Wyatt Botswana, the boys leave the Kalahari Desert to explore the Okavango Delta as they search for a lioness who has been shot by poachers and her four cubs who are with her.

A few of my daughter’s thoughts:

The book was a fairly easy read with relatively large type and 133 pages in the story. It also includes additional pages with information about the real Gannon & Wyatt and blank field journal pages to record your own observations. My daughter was easily able to read most of the book herself (a second grader who reads above grade level). However, there were occasionally words that she did not know when we were reading together (like nauseated). She asked what the word meant and we kept reading.

I loved that the characters and locations are based on real life teens and their travels. Through the series, kids will explore a variety of destinations. My only reservation is that the book series is not for the faint of heart. In Botswana one of the boys gets quite sick and they are also captured by a poacher who holds a gun to one of the boys and tries to take him hostage. At one point, my daughter told me that she knew the book would turn out ok, because most books have happy endings. I was also about to remind her what I used to tell her about the Magic Treehouse books, “You know the main characters survive because there are more books in the series”. If your children would be disturbed by this content, I do not recommend these books. With this content, I felt like the series would be better for someone a little older than my daughter (she turns 8 in 6 weeks).

I was selected for this opportunity as a member of Clever Girls Collective and the content and opinions expressed here are all my own.