Greenfield Village hosts Holiday Nights on several nights through December. This year we attended on December 23 which was a great way to kick off the holiday weekend.

On the pre-Christmas dates, they offer Supper with Santa before the event at an added cost. You can also read my review of the Supper with Santa.
Holiday Nights runs from 6-10p and concludes with a sing-a-long and fireworks presentation starting at 9:40p. The event is held regardless of the weather, so plan to dress warmly. I brought snow pants and boots for my daughter to keep her warm. I wish I had snow pants to keep my legs warm.
Model T and Horse Drawn Wagon rides are free of charge, but there was quite a line after 6:30p. Carousel rides were also free and had a lengthy line. There is an old-fashioned ice rink and skates are available for rent. I still haven’t convinced my daughter to give ice skating a try. They also had numerous fires lit as you walked through the village. 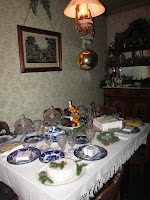 We spent most of our time touring the homes. Each of the homes were decorated for the holidays in a different era (including homes that were not decorated as the holidays were not celebrated). Several of the homes were cooking holiday dinner including Christmas cookies, a goose, and a chocolate making demonstration. A rare treat for Greenfield Village was that Cotswold Cottage was open for visitors. It was staged as a BIVOUAC from World War II with British and American soldiers staying in the home for the holidays. We waited 15 minutes to get in, which is evidently a fairly short wait since the cottage is only open a few times a year. Had I known this, we would have headed to the cottage first. My daughter enjoyed most of the houses. Most of them were walk through and we could stay as long as she was interested. The Cottage was the only one that was hard because of the wait to get in and then there were two rooms and you moved through them as a group. The group ahead of us was taking a long time, so she got bored. 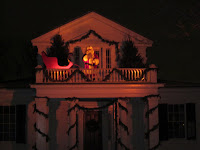 Santa was on a second story porch with a microphone greeting the guests. There were several greeters in the area that you could feed your child’s name to so that Santa can greet them by name. My daughter was thrilled to hear Santa call her name. In front of the house was a pen with several reindeer. 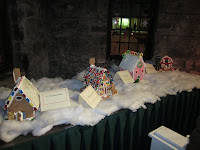 Another fun activity we enjoyed was viewing Gingerbread houses made by local culinary students. We had the opportunity to vote for which house was our favorite. Of course, my daughter selected the pink one as her favorite.
Unfortunately, the 9:40 start for the sing-along was just too late for her. By 9p, she was asking to go home. Since we knew that Christmas Eve and Christmas Day would probably be long nights, we decided to leave early. I wish they would do the sing-along a little earlier.
We had a great time at Holiday Nights. While it was a cold night and there was a little bit of snow on the ground, it was not raining or snowing so the weather was manageable. The fire pits and getting hot chocolate also helped. I will definitely plan to do this again.