Wow did my daughter have fun at the Ann Arbor Jaycees Carnival tonight. We bought her the ride wristband ($18 when we used a coupon) and definitely got our moneys worth. We also added $20 of tickets (24 tickets) for us to use on rides with her. We also learned a lesson – don’t arrive at the carnival at 5 with the intent to go home and cook dinner afterwards. We stayed until 8:30 at which point we decided to just grab dinner on the way home.

Last month when my daughter was at the doctor’s office she measured 47.5 inches, but tonight she was clearing the 48″ signs which allowed her to ride most of the rides, although it also made her too tall for some of the kids rides. We skipped most of the kiddie rides with the exception of a helicopter and the kids Dragon coaster. 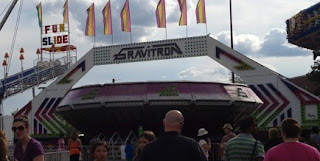 She wanted to go straight to the Yo-Yo (a swing ride). After the swings she went in the fun house a few times and down the fun slide. The Gravitron ride was next to the slide and I saw that it had a 48″height requirement. She likes spinning rides, so I asked if she wanted to go on it with me. She said yes, but as soon as we got inside, the blaring music almost made her change her mind. The ride spins in circles making you stick to the padded wall. The wall is split into segments that then slide to the ceiling while your are spinning. We cycled speeds a few time so that the walls would slide to the floor and back to the ceiling a few times. I was a little worried about how my daughter would like it. She held my hand the whole ride, and was fine. She said she liked it, but didn’t ask to go back on.

There was a nice selection of rides although they were spread out around the carnival even in a certain type of rides. For example the pirate ship and bumper cars (minimum height of 48″) were on the south side of the carnival while Fireball, Paratrooper, Tilt a Whirl were on the north side of the carnival. The kids rides seemed similarly spread out. My only complaint was the quantity of games and their price ($3 minimum). Especially early on, the attendants kept trying to get you to play and since I had already paid for the rides, I didn’t want to pay for games too.

I am definitely glad that we arrived before 5. The carnival was much less crowded since it was dinner time. As it got closer to 8 the lines were getting longer and we had to wait for more rides. There were also more groups of teens wandering around as it got later. I know there were some security issues a few years ago, but I saw the police patrolling the carnival grounds several times.  Coupled with entry restrictions after 9p, hopefully the carnival will remain safe and continue to be offered each year.

One thing that surprised me was that we didn’t run into anyone that we knew (other than the friends we had arranged to meet). Several people I know had posted pictures of the carnival earlier this week, so maybe we just waited too long.

You have one more chance to visit the Ann Arbor Jaycees Carnival this year. They are open noon-8p on Sunday, June 24. Ride Wristbands are available for $20 (print a $2 coupon to buy wristbands for $18). Individual tickets can be purchased for $1 each or 24 tickets for $20.