This morning we went to Wasem Fruit Farm to pick pumpkins with a few friends. Their Facebook page said they only had Granny smith apples for picking, so we did not plan to pick apples. However, when we arrived, we found the they were picking Ida Reds as well. There were 3 families in our group, and we decided to pick a half-bushel of apples to share. 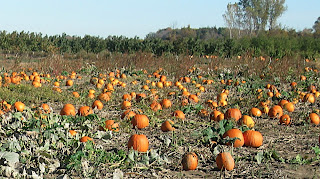 had gourds. We ended up picking 5 pumpkins: 2 pie pumpkins, a white pumpkin (or ghost as my daughter calls it), one for carving, and one to use with her Mrs. Potato Head Princess Pumpkin

). The pumpkins that we picked directly from the patch were $0.35/lb. The pre-picked pumpkins in their store are $0.40/lb. 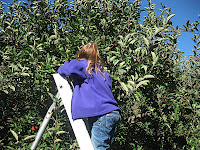 The Ida Red picking was slim. There were only apples on the back 1/4 of each row. We were able to fill our bag easily though. The kids enjoyed climbing the ladder to pick the apples. The apples were $13 for 1/2 a bushel and $0.35 for the bag. There were several other people picking the Ida Red apples, so I am not sure that they will even last through tomorrow, Sunday, October 16. They still have apples available for purchase in the store, or you can purchase a drop bag for select varieties where you can select from apples that are on the ground under the trees. The drop bags are considerably cheaper and would be sufficient if you were primarily interested in cooking apples.

After picking our apples and pumpkins, we retunred to the front where we paid. We also bought popcorn, cider donuts, and cider. All told, my bill was $35 for my share of the apples, 5 pumpkins, a gallon of popcorn kernels, a 1/2 gallon of cider and 1/2 dozen donuts. We started buying Wasem’s popcorn two years ago and found that we really like it. It is price competitive with unpopped kernels purchased at the grocery store. We use a Nordic Ware Microwave Popcorn Popper

to air pop in the microwave to produce a healthier popcorn than oil popped. A gallon container (7.5 lbs) typically lasts us just about a year. We bought a half-gallon of cider. If you purchase your cider in large containers, they charge you $0.05/cup if you want to drink it there. On this trip I remembered to bring cups from home. They have a variety of donuts: apple, pumpkin, blueberry, and plain all of which come with different toppings (cinnamon sugar, sugar, glaze, chocolate). After purchasing our goodies, we gathered at a picnic table to eat our goodies. Unfortunately, the yellow jackets were also gathering there. I actually had one drown in my glass of cider.

This is our third year picking apples and pumpkins at Wasem Fruit Farm. I really enjoy the farm and plan to keep returning in the future.