Yesterday I shared information on W.O.W. Fridays at Michigan Stadium. On Welcome Our Wolverines (WOW) Fridays, there are kiosks near the stadium selling the game day program and offering the opportunity to ask questions to be prepared for Game Day. They are also offering Stadium Tours at 11a, 1p, 3p, and 5p. Tours cost $10, but do not tour the locker room or get to walk on the field because of Game Day.

My family decided to check out the stadium tour. Tour tickets go on sale beginning at 10a. Since my daughter was in school and my husband was working, we opted for the 5p tour. Even so, I stopped by about 10:15a to purchase our tickets.

I parked in a Visitor lot on Greene at Hoover and walked about a block to the Stadium gate where there was a booth setup for WOW Fridays. They were answering questions and had game day programs and posters for sale. However, the tour tickets were being sold at Crisler Center, so I had to walk over. I walked to Crisler with a family who was driving from from Alaska to Dover, Delaware as they relocated with the military. They were stopping in Ann Arbor for the stadium tour between overnight stops in Chicago and Pittsburgh. It was interesting to get to talk to them.

When we returned for our tour at 5p, I parked in the Crisler lot since I now knew that the tour would leave from there. The lot has open parking after 5p and is a yellow lot before then.

The tour begins in the upstairs atrium at Crisler Center near the large M-Den store which was open until 5p. Throughout the tour, there was a photographer from MyFanPics.com taking our photos, but they have still not been posted. 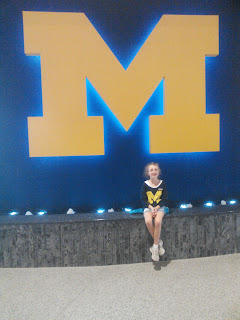 In the atrium there are several interactive display screens that you can use to learn more about Michigan Athletics. However, the favorite activity of both the younger kids and teens was the interactive Basketball Game. I also saw a few adults playing it. 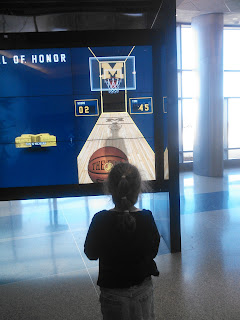 There are also a number of display stands with memorabilia in this area. We proceeded around the Crisler Concourse to the Kids Area. It was great being able to visit the Kids Area at Crisler without the crowds. My daughter enjoyed playing the basketball game and seeing how high she could jump. Unfortunately the sun was shining in the windows directly behind the kids area, so pictures in the athlete faces did not turn out well. The MyFanPics photographer was trying to adjust and not having much like either.

After the Kids Area, we headed to the stadium where we got to go up to the 4th floor of the Club Level and see the suites, sit in the indoor club seats, and learn a little more about the club boxes.

We then proceeded to the regular seats where we were able to walk down to the first row and see the field up close. Because of the game the following day, you aren’t allowed out on the field. We have been on the field before so we didn’t mind skipping that on the tour.

Finally, we exited the stadium by the Block M for one final picture.

We had a great time at the tour. My daughter was enthusiastic about the tour when I first mentioned it on Friday morning. Then, when it came time to leave for the tour she did not want to go (probably because she was playing with our neighbor). When the tour was over, she was really glad that she had gone on the tour.

Disclaimer: Pictures were taken with a Casio G’Z One Commando which I am testing for Verizon Wireless.