This morning we attended the Ann Arbor Airport Pancake Breakfast. After good experiences in 2009 and 2010 and a disappointing visit in 2011, we decided to give it another try after hearing positive reviews from 2012.

We arrived around 9:20a and parked next to the friends we were meeting. We were able to pay and get our pancakes without waiting in line. Breakfast was $5/adults, $3/kids (age 3-7), and FREE for kids 2 and under. Next year, I’ll be paying full price for my daughter since she’ll be 8. The pancakes literally came right off the griddle onto our plates. We were lucky that our friend found a family getting up from a table and the 6 of us were able to sit together. I didn’t see anyone circling for a table, so it seemed that everyone was able to find a seat when needed.

After breakfast, my daughter briefly went into the bounce house, but since her friend did not want to bounce, we decided to take a tour of the planes. They watched the pedal planes for a few minutes, but as tall 7 year olds, they were too big for the pedal planes. My daughter had loved those in prior years.

The first plane we toured was a Civil Air Defense plane and could seat up to 8. It was the largest plane we looked at. One of the pilots was there to supply information about the plane. We learned that you can begin to learn to fly at age 12 with the Civil Air Defense and can fly solo beginning at 16.

We then toured the other plane. The kids were fascinated by the Navy bi-plane. After we finished touring the planes, we saw the biplane take off – leaving a contrail behind it. Unfortunately, I saw the plane as it was half-way down the runway and did not have my camera ready to snap a picture when it took off. We saw several planes take off and land while checking out the planes on the tarmac. There were probably 10 planes that we were able to check out up close. The owners had them open so we could look in the cockpits.

After checking out the planes, we stood in line so the kids could get their hand painted – no faces for my daughter or her friend. My daughter was wearing a Spider-Man t-shirt, so she decided to get a Spider-Man face on her hand. Next time I have recommended that she use her forearm or leg instead of her hand because the Spider-Man washed off the first time she washed her hands.

My daughter concluded with a second trip into the bouncy house. She loved having a chance to bounce – I guess she did not get her fill at her school’s ice cream social this week. I do wish there was some supervision provided at the bounce house. Some of the children were incredibly rough including bouncing into the net walls and even managing to partially collapse a wall by all bouncing against it at the same time. There was also no enforcement of how long kids were in the bounce house. 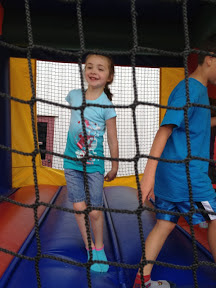 There were helicopter rides offered, but we decided not to participate. My daughter briefly asked about it. When I told her a ride would cost as much as an American Girl doll, she wanted to know if she could have the doll instead. (The rides were $50/person, and I would not have let her go without an adult.) I corrected that I wasn’t offering her the doll, but was illustrating how much the ride cost.

We left about 10:30a and headed to the grocery store. However, I just read that we missed some excitement around 11:15 with a minor plane crash. Fortunately, none of the passengers were seriously injured.

The only challenge we experienced with the pancake breakfast this year was getting to and from it since construction has started on the new traffic circle at State and Ellsworth. Ellsworth is closed between State St and Airport Rd. We were headed south on State St which becomes one lane (on the former north-bound) side of the road and turned right on Airport Blvd (past Costco) and crossed Ellsworth into the airport. To leave, we followed Airport to it’s southern intersection with State St and turned left to head north. We headed north and then turned east on Ellsworth. I am glad that it was Sunday morning with minimal traffic. I will probably be cutting back on trips to Costco, especially during high traffic times, while the construction is underway.

I definitely recommend the Ann Arbor Airport pancake breakfast. We will try to make it next year.