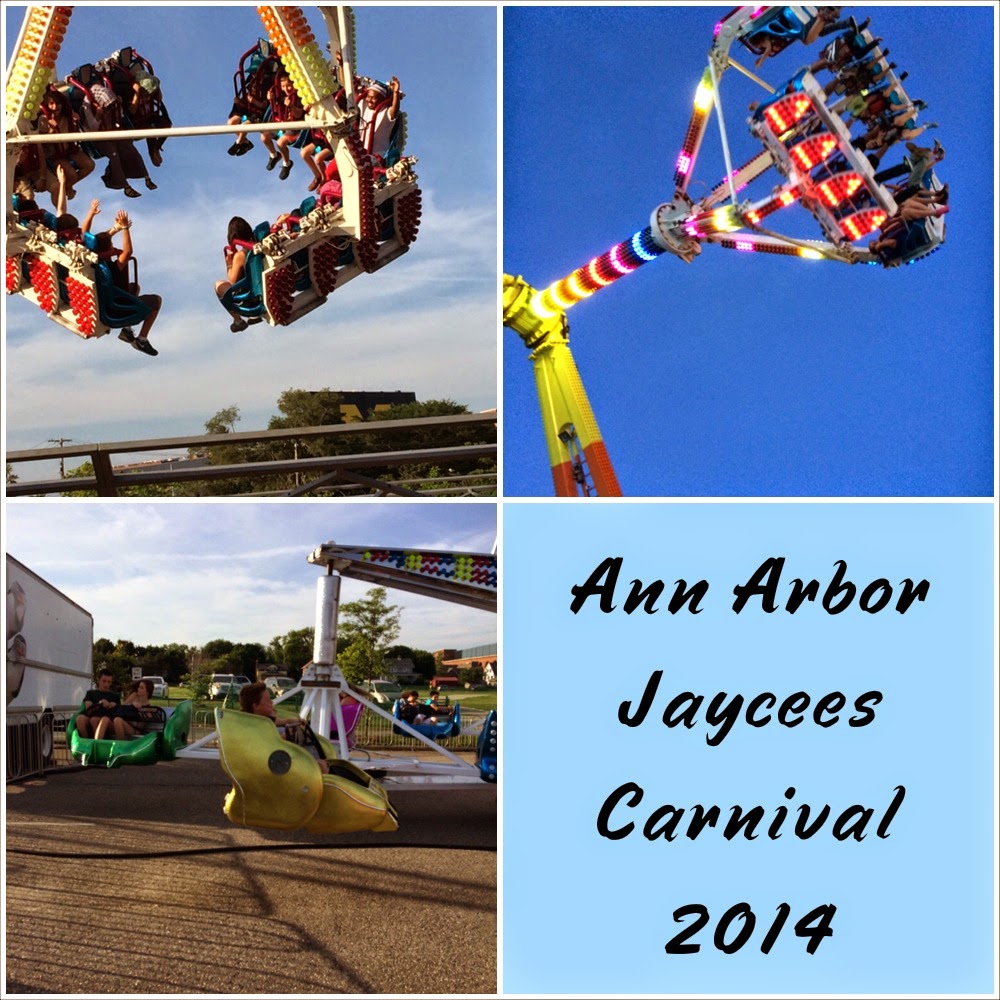 Tonight we attended the Ann Arbor Jaycees Carnival at Pioneer High School with friends. We arrived around 7p and stayed until just after 10p.

The carnival is best accessed by parking in the Park and Ride lot on Main St. There is also overflow parking available in the grass or in the larger main lot.

When we arrived, there was quite a line to buy tickets/wristbands. It did move fairly fast. I was equipped with the ride coupon on my phone. Note – you have to either bring a printout or go to the Jaycees stand to get a physical coupon. I was able to quick dash to their stand and make the swap as our friends finished their transaction. You can purchase either an unlimited wristband ($20) or individual tickets. I definitely recommend a wristband for the kids. I think this was the first year that we did not need extra tickets. My daughter and her friend are both over 52″ so they were able to ride everything unaccompanied by an adult. If you have shorter children, there are some rides that they will need to be accompanied on. I definitely remember a couple of years where my daughter decided to be daring, but needed an adult to ride with her or where we were managing tickets to have enough for us to accompany her on rides.

My daughter and her friend had a great time riding the rides. After getting their wristbands, they bee-lined for The Extreme – a large swinging, rotating arm. I knew my daughter would love it as she has been on several similar rides. However, her friend isn’t as big of a ride fan as my daughter. They both loved the ride. The kids continued with rides on the Scrambler, Tilt-A-Whirl, Slides, Paratroopers, swings, bumper cars, and the pirate ship. They also loved the Fun House and the Wacky House both of which were visited repeatedly. We definitely got our money’s worth out of the wristbands. We were at the fair from 7-10:15p. Even then, we had to drag the kids out of there. I think they would have stayed until 11p closing time. I am glad that we went with a friend. It was more fun for my daughter than riding alone.

In addition to the rides that my daughter and her friend rode, there were “kiddy rides” such as jet-skis,  motorcycles, cars, a train, dragon coaster, and a carousel. If your child only rides a few kiddy rides, an arm-band may not be the best choice since they cost less tickets.

There was also a special fee bungee jumper and bull-ride that were not covered by the ride wristband. In addition to the rides, there were lots of games available. Since we had paid for the wristband, we stuck with the rides that we had already paid for. The games include some games for younger children where they will all win a prize as well as the typical difficult carnival games.

There was also a decent variety of food. We ate before going to the carnival, but did snack on Fried Oreos (my daughter who shared with her dad and I), Cotton Candy (her friend), and frozen lemonade (my husband shared with my daughter and I). They also offered pizza, gyros, Italian sausage, funnel cakes/elephant ears, ice cream, and mini-donuts.

I do recommend arriving to the carnival early as the rides (particularly the thrill rides) got more crowded later in the night. On the other hand, the games were fairly empty. The carnival continues through Sunday. They are open from noon-11p on Saturday, June 28 and noon-10p on Sunday, June 29.