My daughter’s birthday is this week and we often end up having her birthday party over the holiday break when her cousins are visiting. The last two years her party has actually been on New Year’s Eve. No matter how much we tried to convince her to have her party out, she insisted that her party be at home with a Tangled theme. 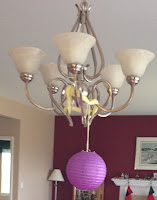 Two major themes in the movie are lanterns and hair. I used both to decorate.

that they decorated with and let us borrow them. We have a finished basement with a large play area that was the game and craft area for the party. The basement has a drop ceiling so I was able to thread yarn through the lanterns and into the ceiling without needing to use tape. I also tied them to the chandelier in the kitchen and dining room.

Then, I was inspired by the Paging Supermom blog to create Rapunzel’s hair out of yarn. I created the hair in my own way. I used a large barrette as my anchor and tied about 60 yarn lengths (about 20′ each) onto it. They looked great, but I learned as I went along. I should have thought out my length better because it ended up being too long to use in many places, but not long enough to use on the stairs. It only ran the length of half the stairs (to the landing). It was also extremely difficult to work with such long lengths of yarn. They kept getting Tangled in each other. I learned from my mistake and made a second shorter braid to hang on my front door. That time I doubled the yarn lengths tying them in the center instead of at an end. This gave me a fuller braid. We were able to use the barrette to hook it on the wreath holder. Next time, I would use a pony tail holder as my base instead of trying to thread the yarn into the barrette. I also think the pony tail holder would make it easier to attach to different things.

Finally, I took about 8 non-braided lengths and wrapped them around my chandeliers and the basement support pole. This was really easy and I wish I had started doing this sooner so I could have done it in a few more places. I wish I had a picture of my decorated basement but I barely finished it before the party started and my husband took the lanterns down before I was able to take pictures.

I also carried the hair theme into the goody bags. I bought small barrettes and made each girl their own braid. I used the doubled lengths of yarn, making braids that were 12-18″ in length. Now each of the girls can be Rapunzel. For other party favors, I found Princess magnets and sticker books in the dollar section at Target. They had a Cars version that I used for the boys. I also added a pack of fruit snacks.

Stay tuned for a post on crafts and games.

Disclaimer: I am an Amazon Associate and am compensated for sales through Amazon links. I appreciate your support of my blog by shopping through my links.

0shares
Scroll to Top
We use cookies to ensure that we give you the best experience on our website. If you continue to use this site we will assume that you are happy with it.OkCheck out our Privacy Policy here: