My daughter was insistent on having a Tangled party at home this year. Even in my attempts to convince her to have her party out, it was still going to have a Tangled theme. A key element to any party is a cake. My daughter hates eating cake, but always wants something fun so it is very frustrating to put so much effort into something she doesn’t eat.

I tried to buy a cake, but was not impressed with the Tangled cakes at our grocery store. There were only edible screen printed options and I am not a fan of these cakes.

I found this idea for Pascal cupcakes on Disney Family Fun, but I wasn’t sold. I had done similar cupcakes last year for her Zhu Zhu Pet party last year. I also found this cake tower recipe, but it did not actually contain much cake to feed 20 kids and their parents. 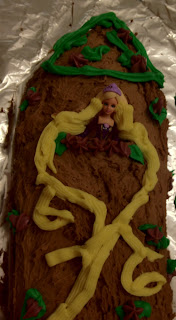 So, I decided to get creative and design my own cake. Early one morning the idea came to me. I would make a 2-D tower by slicing a 13×9 cake in half lengthwise. I cut the corners off one end of one half to make a triangular roof. I also cut out Rapunzel’s window right below the roof line. We found a small plastic “Barbie as Rapunzel” figure at the Target checkout to place in the window. All of the Disney Rapunzel dolls had cloth clothes and “real” hair that would be ruined in the cake. The Barbie had a removable cloth skirt, so we were able to use her.

The biggest challenge I had with the cake (other than finding the Rapunzel) was finding a platter long enough to place it on. I had a shelf leftover from the entertainment center we customized this fall that was the perfect length. I covered it with wax paper and two layers of foil for a perfect cake board. 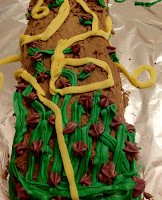 I made a double batch of buttercream icing and split about 2/3 to ice the cake, and the remaining to add vines, moss, hair, and flowers. I added cocoa powder to the main icing and vanilla to the remainder. I then sub-divided the remainder in order to dye it green, yellow and purple.  We had exchanged gifts with my brother and his family the day before her party and they had given me a Kuhn Rikon Cookie and Cupcake Decorating Set

which I put to use on the cake. The leaf tip was great for making vines & moss on the tower. I was planning on the vines at the bottom, but my daughter was insistent that there be moss over the whole tower. I added a few purple flowers to the moss. The basket weave tip made great hair. I added extra tendrils to Rapunzel’s hair to make 6’s.

I was planning to just use a plastic bag with the corner cut off to do the icing with no fancy texture, but after getting the decorating kit I have to admit that it looked great with the textured tips. The squeeze bottles were a little hard to fill, but they were extremely easy to pipe the icing. I definitely recommend the Kuhn Rikon Cookie and Cupcake Decorating Set

I was pleased with how the cake came out. I like that she had a customized Rapunzel cake instead of one of the ones that you can purchase at the store. Being so long and narrow, it was hard to get a good picture of the whole cake. It looked better in person than it does in the picture. My daughter loved the look of the cake and was insistent on getting one of the pieces that had Rapunzel in it. As far as taste, she only ate 1 bite though before asking for a piece of brownie. Everyone else seemed to enjoy their cake.

Disclaimer: I am an Amazon Associate and am compensated for sales through Amazon links. I appreciate your support of my blog by shopping through my links.