Slooooks is an award-winning portable game created by Kate Patterson, a Grosse Pointe, Michigan Mom of 2. The game is based on a combination of I Spy and a scavenger hunt. (Find out more on the game from their information sheet). Slooooks has been named a Dr Toy winner for best Vacation Products and won the Creative Toy Awards 2011 Game of the Year Award from Creative Child Magazine. 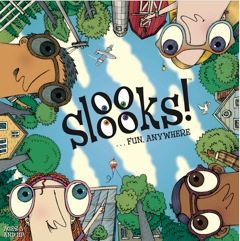 The objective of the game is to be the first to open all of your eyes on the game board. On your turn you have to find something in your color-letter combination before the timer runs out. For example, you might need to find something red that starts with the letter L which could be a red light. On your turn you spin two wheels, one for color and one for letter. There are 16 letters on the spinner so you won’t get stuck with a really hard letter like Q, X, or Z. The vowels are also excluded. The game can be played anywhere, even using items you can think of instead of what you can see. The game consists of the game board with integrated spinners and a timer (which is held to the board with elastic for storage) so it is highly portable.
My daughter is loving Slooooks. It is helping her both with her starting sounds and to think creatively. For example, the yellow box of Duplos could be a yellow box, yellow plastic, yellow container. The game is not boring for the adults either as some educational games can be. We have played it a number of times since receiving it yesterday. My parents stopped by and she had to play it with them and then take it in the car. This is great as a travel game because it has only one non-attached piece, the timer and even that has an elastic to hold it to the game board for storage. I also think this would be a great classroom game to use in a small group. Playing it on the go will also keep the game from becoming repetitive so you can’t use the same objects each time you play. I also like that it has several suggestions for alternative game play – Speed Slooooks, Challenge Slooooks, and Mind Slooooks. You could also eliminate the letters and just do colors to allow a younger child to play. With multiple children of different ages, you could give them each their own difficulty to level the playing field. For example, a 3 year old finds an object of the color they spun, a 5 year old finds an object with the letter they spun, and a 7 year old finds an object with both the color and the letter they spun.
When we first opened our game two of the eye covers were stuck, but I was able to wiggle them out and they are working fine now. My only other complaint is that the brown is really dark and hard to distinguish from the black at a quick glance.
I definitely see this as a game that will be in our road trip bag and it may even get brought to a few places where I know we’ll be waiting. I tend to bring her iPod or our iPad for time killing, but this would occupy us both. Actually, I think this game would translate nicely to a mobile app (basically replacing the game board and timer with the app and leaving game play as is).
Slooooks can be purchased directly from the company for $17.95 plus shipping and handling.
I am giving away a copy of Slooooks provided by Ashare Patterson Design, LLC. To enter, please leave a comment below with where you would play Slooks.
For bonus entries (leave a separate comment for each, I will verify completion of task for the winner):
The contest will be open until Tuesday, September 27 at 11:59a. The winner will be contacted by email and will have 48 hours to respond before I select another winner. Be sure to include contact information in your comment (by signing in with one of the providers or providing your email address which is not published in the specified field). 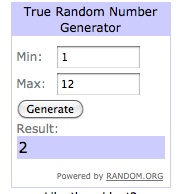 Disclaimer: I was provided with two copies of Slooooks, one to review and one to giveaway by Ashare Patterson Design, LLC. All opinions expressed are my own.
The following two tabs change content below.

Taste of HDS: STEM for Preschoolers

February 23, 2020
Anna Mae owns & operates Ann Arbor with Kids, a website dedicated to Family Activities in Ann Arbor. My husband and I moved to Ann Arbor in 2003 and our daughter joined the family in 2006.