Sing Along with Santa Review

The Ann Arbor Symphony Orchestra invited my daughter and I to attend their Sing Along with Santa yesterday. Sing Along with Santa was held at the Bethlehem United Church of Christ on Fourth Street. Since the concert is held in a church, there is no assigned seating. We sat about 10 rows back on the main aisle so she would be able to see better. I was surprised that my daughter, almost 8, was one of the older children there especially without a younger sibling. She and I both really enjoyed the concert, and would enjoy it as an annual tradition.

While Sing Along with Santa is an A2SO production, the whole symphony is not present. There was a pianist and a bassist providing accompaniment. The songs were done as a mix of instrumentals and sing alongs. They did a nice job alternating between sing alongs and instrumentals to keep the kids from getting bored. They also taught us a little about the Bass and different ways to play it. This part reminded me of one of their KinderConcerts that are held at local libraries. They will have KinderConcerts with Cello in January and Flute in May. The bassist also performed two songs as a trio with her daughter on piano (10 years old) and son on bass (11 years old). I was most impressed with her daughter on piano (I am sure her son was equally as good, it was just easier for me with little musical training) to differentiate the piano instead of her son’s bass versus her bass.

Santa was a true performer. He also had elves accompanying him…from the UM Men’s rowing team. The elves were also excellent performers. During many of the Sing Along Songs, Santa was wandering the church and greeting children. In addition to the Sing Along, Santa calls the kids up for a reading of Twas the Night Before Christmas. He and the elves did a wonderful job retelling the story.

My daughter’s one wish (that would make or break the concert for her) was that they sing the Twelve Days of Christmas. She was very relieved to see it on the program as one of the last songs. Not only was it included, it was the most fun song. They broke the audience into sections to each take a day to sing. We had my daughter’s favorite day…Five Golden Rings. When it was your day you stood up to sing them sat back down. Everyone had a lot of fun…particularly when they went from 10 lords a leaping to seven swans a swimming skipping over eight maids a milking and nine ladies dancing in the eleventh day countdown so we had to sing that verse over again.

We had a busy morning and some work to do in between so we were not able to make the pre show activities. However, we did stay for the post-show activities in the church basement. They had cookies and cider provided by Busch’s, the chance to meet with Santa and have your photo taken, and crafts. My daughter went to get a cookie while I checked out the line for Santa which was very long. She then moved on to the crafts. The first craft that we did was making a Santa from a paper plate, construction paper hat, goggly eyes, and cotton balls. My daughter had a lot of fun with this craft . The second craft was a construction paper tree on a white background. They had pom-poms, stickers, and crayons to decorate it. (note, if you are doing the Christmas Countdown, these are fun, easy crafts). 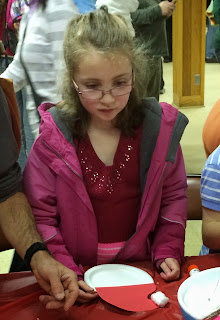 I had initially gotten in a very long line for Santa (it wrapped half-way around the room). We were encouraged to get snacks and do the crafts while the line decreased since everyone would have a chance to see Santa. When she moved to the second craft, a Christmas Tree to be decorated, I decided to get in line again to see Santa. Santa’s elves were doing a great job of entertaining the kids in line and Santa was spending quite a bit of time with each child (which is great when it is your turn). By the time she had finished the craft, it was 40 minutes after the concert had ended and I was still very far back in line (actually I was the last person as no one else had joined the line after me). While I had moved up, at least half of the movement was from people in front of me who decided not to wait any longer. At that point, the family that we had originally been behind were about half-way between me and Santa. Based on how fast the line had been moving, I estimated that they had 20 minutes or so to go and I had an additional 20 minutes. We had seen Santa that morning at the Briarwood Mall Santa Breakfast, so my daughter did not want to wait any longer and I knew I needed to get home to make dinner.
Overall, we had a lot of fun at the performance even though we didn’t get to meet Santa. My daughter loved singing along with the songs and participating in the Twelve Days of Christmas. We are definitely going to try to attend again next year. My daughter is already talking about attending The Planets symphony in March. I want to wait until it gets a little closer and we have our schedule for the spring (soccer, Girl Scouts, etc) before buying our tickets.

Disclaimer: I am a Groupon Affiliate and am compensated for sales through Groupon links. I appreciate your support of my blog by shopping through my links.

If you are still in the mood for a holiday concert, their Holiday Pops concert is on Friday, December 13. Discounted Groupon tickets are available for the show.