When I first heard that Briarwood Mall was getting an indoor ice rink I was confused as to how that would work. When I first observed the rink in November, I was surprised to find that it was a synthetic ice since I had never heard of that before.

My daughter had never been interested in ice skating after her first experience at a friend’s birthday party when she was in kindergarten. However, the rink at the mall has intrigued her, particularly since a friend told her that it isn’t as hard (or as wet) as ice when you fall. Today when we were at the mall for the Noon Year’s Eve celebration, she asked to try it out. We were meeting family for lunch, so I told her she could test it out after lunch.

Ice skating costs $6 for up to an hour and included skate rental (The Briarwood Mall website lists skate rental as an additional $2, but the sign on site said it was included). The rental skates are hockey skates. I don’t think that I had my daughter’s skates laced tight enough, but she said they were fine.

My daughter was very brave with skating. She walked from the bench to the gate herself and quickly moved away from the fence. She was quickly “walking” across the ice, more so than gliding as is typical for beginning skaters. She even figured out how to do a little spin. Not bad for a first time. Naturally she fell a few times but she quickly got back up – and no tears. 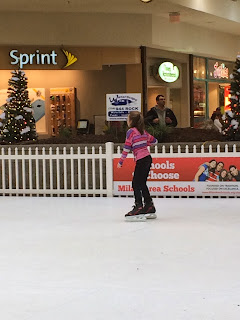 I recommend having your child wear old clothes to go skating at Briarwood Mall. My daughter’s black jeans were covered in white shavings from the synthetic ice (which of course don’t melt like ice). I also heard two other girls comment about their hands being oily.

My daughter skated for about 25 minutes. Had a friend been with her, she probably would have skated for longer. After skating for about 15 minutes, her cousins stopped by to see her on their way to the car. They watched her for a while before leaving. Once she saw they had left, she was ready to be done as well. Honestly, she lasted a lot longer than I thought she would.

I am glad that we waited until after lunch. The ice rink was fairly crowded at the end of the Noon Years Eve celebration, but there were only two other girls on it when my daughter started, and then she had the whole rink to herself.

My daughter loved skating and I am sure will want to skate again when we are at the mall. We are also considering signing her up for ice skating lessons. I loved to ice skate when I was her age, so I am thrilled that she has taken an interest.