My daughter loves both Disney Princesses and comedy, so she has been eagerly awaiting the arrival of Disney’s Frozen in theaters. Ever since we saw the early trailers featuring the snowman Olaf, she has been waiting for the movie. Her excitement peaked when we were at Disney World two weeks ago and she had the opportunity to meet Princess Anna and Queen Elsa.

Disclaimer: Some content in this post was provided by Walt Disney Animation Studios. We were invited to a free advance screening, but were unable to attend. All opinions are 100% my own.

Disney’s Frozen opened in theaters today. Walt Disney Animation Studios provided me with the following boilerplate description of the movie:

Walt Disney Animation Studios, the studio behind “Tangled” and “Wreck-It Ralph,” presents “Frozen,” a stunning big-screen comedy adventure. Fearless optimist Anna (voice of Kristen Bell) sets off on an epic journey—teaming up with rugged mountain man Kristoff (voice of Jonathan Groff) and his loyal reindeer Sven—to find her sister Elsa (voice of Idina Menzel), whose icy powers have trapped the kingdom of Arendelle in eternal winter. Encountering Everest-like conditions, mystical trolls and a hilarious snowman named Olaf (voice of Josh Gad), Anna and Kristoff battle the elements in a race to save the kingdom. The film is directed by Chris Buck (“Tarzan,” “Surf’s Up”) and Jennifer Lee (screenwriter, “Wreck-It Ralph”), and produced by Peter Del Vecho (“Winnie the Pooh,” “The Princess and the Frog”). Featuring music from Tony® winner Robert Lopez (“The Book of Mormon,” “Avenue Q”) and Kristen Anderson-Lopez (“In Transit”), “Frozen” is in theaters in 3D on November 27, 2013. For more information, check out Disney.com/Frozen, like us on Facebook: facebook.com/DisneyFrozen and follow us on Twitter: Twitter.com/DisneyAnimation.

This morning we took advantage of my daughter’s day off from school and our canceled travel plans to see Frozen. We saw the 10:15a show at Rave Cinemas – did you know that the first matinee showing of each movie is only $5.25 ($8.25 for 3D shows)? The show had quite a few people in attendance, it was obvious that school was closed today. 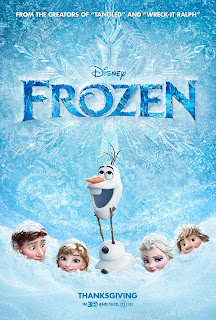 Frozen is loosely based on the story of the Snow Queen by Hans Christian Andersen. Frozen starts with a young Princess Anna awakening her sister Princess Elsa wanting to play. We discover that Elsa can create snow and ice. However in the course of their play, Elsa ends up hitting Anna’s head with a stream of ice and knocking her out. Their parents, the King and Queen, take Anna to the trolls who cure her, but the family decides to lock themselves in the castle to hide Elsa’s powers while erasing Anna’s memory of Elsa’s powers and concealing them from her. The girls remained locked in the castle even after their parents death on a stormy sea until Elsa comes of age and is coronated as Queen. The castle is opened up for the coronation thrilling Anna to have contact with the outside world while making Elsa nervous about accidentally revealing her powers. All goes well until Elsa and Anna get into a fight at the ball over Anna marrying Prince Hans who she has just met. In the course of the argument, Elsa loses control and things start freezing. She runs thinking to take her powers with her, not realizing that she has left their Kingdom of Arendelle in a frozen winter. Anna sets out after her sister determined to fix the problem.

As Princess Anna strikes out to find her sister and convince her to return, she is helped by mountain man Kristoff and his reindeer Sven. They also encounter the snowman Olaf who was created by Elsa and looks like one that she and Anna created as children. Olaf provides comedic break through the film with his antics, especially his obsession with warm weather and wanting to lay on a beach. After finding Elsa, Anna is once again hit by Elsa’s powers, this time in the heart. Kristof and Anna discover that she can only be healed by an act of true love. Anna’s first thought is to rush back to Prince Hans, who has been looking over Arendelle, for True Love’s Kiss. When that doesn’t work out, she discovers an act of true love that she never thought to look for.

Frozen is showing in both 2D and 3D. We saw the 2D version at my daughter’s insistence. I think because she wears glasses, she sometimes prefers to see movies without needing to wear the 3D glasses. From what I have heard, the 3D is supposed to be very well done.

We really liked Frozen and definitely recommend it to anyone. As an adult, I really enjoyed the movie instead of enduring it for my daughter. (Actually, my husband was disappointed to hear that we made plans to see it today without him.) While Frozen includes both Kristoff and Prince Hans as love interests for Princess Anna, the focus of Frozen is really on the relationship between the sisters. The comic breaks provided by Olaf and the relationship between Kristoff and Sven will appeal to boys who may be turned off by the “princess movie” and main characters of girls.

After the trailers, we are treated to a Mickey Mouse Short, “Get a Horse”. The film starts with a  classic Mickey and Minnie adventure that quickly expands beyond the confines of the old black and white film when Mickey breaks through the screen followed by several of his friends as they fight back against Pete who has captured Minnie Mouse.

My daughter loved the movie and was thrilled with her choice of a Princess Anna doll while we were at Disney World and renewed her request for a Princess Anna costume. Since the standard dress-up clothes are typically a 4-6x which is way too small for her, I had to look to a costume. I was able to order one for her this afternoon from the Disney Store (in a size 10) at 20% off with my Disney Rewards Credit Card and Free Shipping on all Frozen items. She had saved part of her gift card for souvenirs from Disney World for a costume from the Disney Store (which are less expensive, and typically more comfortable than the ones found through Disney Parks) and I was able to use the remainder of her gift card for part of the costume and treated her to the rest since she has gone above what I typically ask of her in helping with some sponsored posts on this blog lately.
I definitely recommend seeing Frozen in either 3D or 2D.

You can watch the trailer below before heading out to see the movie: